Despite being one of their brightest stars this season, one of Chelsea’s young first-team players has hit back at rumours he has demanded to be the best-paid player at the club.

Tammy Abraham was responding to a Chelsea fan account on Instagram citing a Daily Telegraph report which noted that he wasn’t asking for a £180,000 per week salary, or to be made the highest earner. 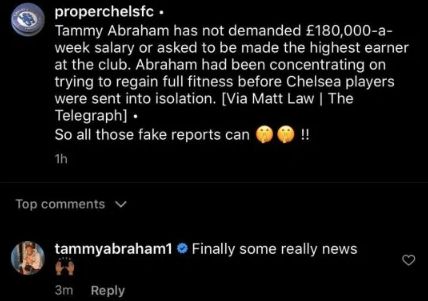 It’s believed that the Blues have been working on contract renewals for a number of players, but the coronavirus situation has meant that such talks are all on hold for the foreseeable future.

Before injury curtailed his season, Abraham was a huge success story for Frank Lampard, continuing the goalscoring form he had shown whilst on loan at Aston Villa.

As one of the Premier League’s hottest young properties, it would appear to be fairly clear that he is deserving of an upgrade in his remuneration, however, Chelsea supporters will surely be heartened to hear that, contrary to the rumours, he’s not demanding the earth to extend his stay at Stamford Bridge.