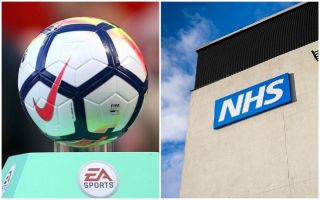 Most of the Premier League’s clubs have shown supports for the NHS especially and the carers worldwide that are fighting the battle against the Coronavirus pandemic.

The #ClapForCarers movement has spread across the entire United Kingdom today, with citizens applauding the selfless contributions of health workers at this challenging time for the entire world.

Liverpool delivered a wonderful message, which included words from manager Jurgen Klopp, as well as mens and women’s first-team players and staff at the club.

Brighton were also one of the many clubs to show their support, it was announced earlier today that one Seagulls player tested positive for the virus.

To all the health and social care workers across the world helping to fight Coronavirus, thank you. #StayHomeSaveLives #ClapForCarers pic.twitter.com/nFY9DjO19e

Let’s take a moment to #ClapForOurCarers, and show appreciation for the amazing work they do ? pic.twitter.com/w4VmvNygPx

To all the health care workers around the world.

A little message from us to you… ?? pic.twitter.com/1EuwvAdSSa

Not all heroes wear capes.

To all the staff at @UHSFT and the other hospitals in our community.

To all the caregivers risking their health for our own.

To everyone working in the healthcare system across the country.

It’s great to see so many top-flight clubs showing support for those who are battling Covid-19 on the frontline, the clubs involved also reiterated messages such as ‘stay at home, save lives’.

These messages will hopefully encourage more citizens to stay at home if possible, the best thing we can all do at this time is self-isolate – if we have the chance to do so.