The 20-year-old attacker is one of Europe’s most exciting young talents at the moment after his remarkable rise at Dortmund, and it would be great to see him in the Premier League in the near future.

The Evening Standard suggest Man Utd are the favourites to sign Sancho, but according to a report from Sport Bild, as translated by Sport Witness, Chelsea have been working ‘intensively’ to try to get him as well.

It remains to be seen which club Sancho might be most tempted by, but in this day and age fans will look closely for any clues on social media.

Messages exchanged with players, or even likes of tweets or Instagram posts can get fans rushing to conclusions, and this exchange below is certainly an interesting one… 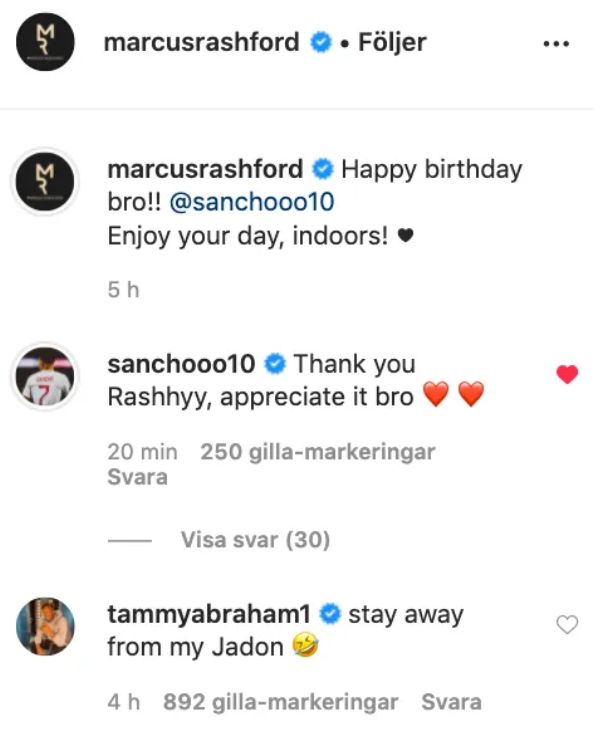 Rashford firstly wished Sancho a happy birthday (he turned 20 yesterday) and Abraham later joined the chat by telling the United ace to “stay away from my Jadon”.

This could suggest Abraham is still clinging to the hope that Sancho might move to Chelsea, and doesn’t want Rashford trying to charm him into heading to Old Trafford instead.

Sancho would be a useful signing for both these clubs given their need to strengthen in attack at the moment.

The England international would be an ideal replacement for flop signing Alexis Sanchez at United, whilst also giving Chelsea the best possible long-term successor to Eden Hazard after his move to Real Madrid last summer.