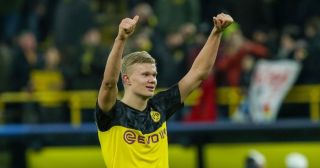 Manchester United decided to pull out of a move for Erling Haaland in January, over fears that Mino Raiola would try and control his next move in the summer.

This is according to James Robson of the Evening Standard, who states that the club thought signing the player would set a ‘dangerous precedent’.

Such a thought stems from the fact that Raiola wanted to insert a buy-out clause in the proposed deal, potentially leaving the Red Devils in a vulnerable position, come the summer.

Haaland’s current buyout clause at Borussia Dortmund is reportedly within the region of £50m, not exactly a bad price for a 19-year-old that has forty goals to his name this season.

The Norwegian ace will, therefore, be available for any club that wishes to activate his release clause this summer, leading onto interest from La Liga giants Real Madrid, as per the Metro.

As Robson states though, this interest only justifies United’s initial fears. Raiola is known for his players making continuous transfers and given Haaland’s release clause, it’s hard to not imagine anybody making a move for the young star.

He will continued to be linked with a move away from Germany, despite having arrived just a few months prior.