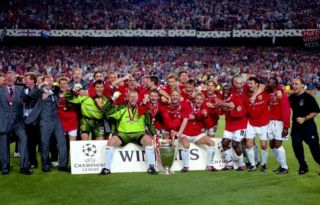 Manchester United legend Peter Schmiechel claimed that he regrets leaving the club when he did.

The Danish goalkeeper came to Old Trafford from Brondby in 1991 and spent eight years there, making 398 appearances for them across all competitions. He even scored a goal for the Red Devils in a UEFA Cup match against Rotor Volgograd in 1995.

Schmeichel won 15 trophies whilst at Man United that included five Premier League titles and the Champions League. He eventually left the club in 1999, joining Sporting CP and later went on to play for Manchester City.

Schmiechel said that he could have spent a few more years at United but left because he had a lot of pride. Speaking to talkSPORT, the 56-year-old said: “I could have possibly played on for many more years [at Man United] had I cut back a little bit on the pride and spoken to the manager about it – but I didn’t.

“I was too proud of my position at the club. When you get to your mid-50s you look back and have a better understanding of things. That was a young man’s head making that decision, I admit I probably should have held out. It’s not a regret as such, but it is a regret at the same time if you get what I mean.

“I loved the football club so much, why would I want to leave? But I was so worn out at the time so it would have taken something very extraordinary for me to change my mind.”

The fact that Schmiechel managed to be a regular for Sporting, Aston Villa and Man City right up to his retirement in 2003, maybe he would’ve been able to do well under Sir Alex Ferguson for a few more years. Following the Dane’s departure, it took United a while before they found a long-time goalkeeper in Edwin van Der Sar although Fabien Barthez would also have become one if not for his performances at the end of the 2002/03 season.