Manchester United could be set for a number of changes in the near future as transfer gossip continues to link them with high-profile ins and outs at the club.

The Red Devils have often spent big in the post-Sir Alex Ferguson era, though not always to great effect as so many of their most exciting signings ended up being total flops.

Angel Di Maria, Radamel Falcao, Romelu Lukaku and Alexis Sanchez are among those to have failed to live up to expectations, but perhaps the club now seem to be back on the right track under Ole Gunnar Solskjaer.

The Norwegian tactician has done particularly well with the signings of Bruno Fernandes and Harry Maguire, while the likes of Aaron Wan-Bissaka and Daniel James look promising talents for the future.

Paul Pogba, however, is another big name who has had a difficult season, and his future remains in doubt as Calciomercato link him with Juventus, which perhaps gives United a good opportunity to change things around in midfield.

Jack Grealish has been linked as a top target for MUFC by the Daily Star, suggesting he could be on the move to Old Trafford for around £70million in the next transfer window.

This could perhaps allow Solskjaer to play Grealish alongside Fernandes in a more creative and dynamic midfield three, as we put together in the graphic below.

Further forward, there could surely be room for the signing of Lyon striker Moussa Dembele, who has been linked with Man Utd for around £60m by the Sun.

This could take the pressure off both Marcus Rashford and Anthony Martial, who may be better suited to wide-forward roles anyway, though Rashford could also continue to play up front when Dembele is rested or unavailable.

Video: Fuming Thomas Tuchel says “no one can be happy” with Chelsea’s last two games
Arsenal ready to pay €40million for attacker who wants Premier League transfer
Liverpool prepare mammoth transfer bid that is likely to have repercussions for Chelsea & Man Utd

Finally, a new centre-back could also be targeted as Harry Maguire surely needs a better partner than the likes of Victor Lindelof and Eric Bailly, and Napoli’s Kalidou Koulibaly seems the ideal candidate after his world class performances in Serie A.

Corriere dello Sport recently linked the Senegal international with United for around £90m, and he could be crucial in helping take this team forward by giving them a defence to match that of Liverpool.

Also in our XI below are academy graduates Brandon Williams at left-back, and Dean Henderson in goal, with David de Gea looking past his best for a while now and perhaps showing it could be wise to sell him along with Pogba to fund the signings of Koulibaly, Grealish and Dembele.

The Daily Mirror have suggested De Gea could be in the firing line, and Henderson’s fine form on loan at Sheffield United shows he could be ready to step in as number one. 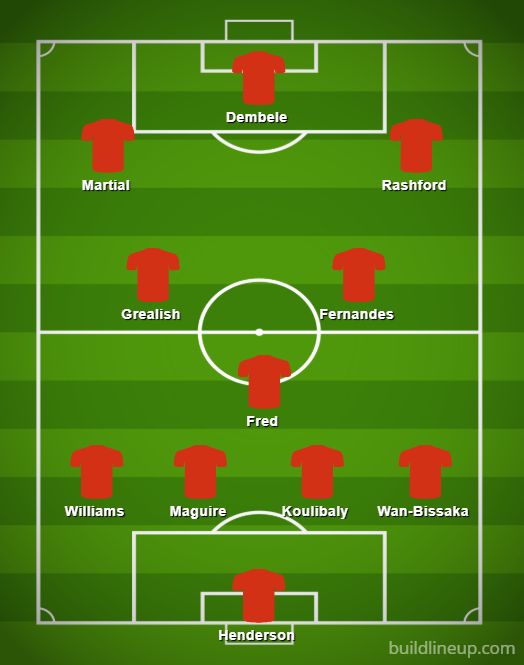