Liverpool legend Jamie Carragher revealed his Premier League Team of the Season so far and included as many as seven players from the Reds.

In goal, the 42-year-old opted for Sheffield United’s Dean Henderson ahead of Alisson and Burnley”s Dean Henderson who has more clean sheets than any other goalkeeper in the league so far. The 23-year-old has played a key role in Chris Wilder’s side being where they are now and there’s every chance of him dethroning Jordan Pickford as England’s first-choice goalie.

Carragher opted for an all-Liverpool defence in Virgil van Dijk, Joe Gomez, Andy Robertson and Trent Alexander-Arnold. On the right-back’s selection, the Reds legend said as quoted by the Daily Star: “I cannot imagine there will be any argument. His form speaks for itself with 12 Premier League assists. He is Liverpool’s playmaker at right back.

SEE MORE: Arsenal set to lose to Liverpool in transfer battle as £70m price tag proves too much

“I would add that he must be the Young Player of the Year, and will probably go on to establish himself as England’s first-choice full-back before the next major international tournament.”

Speaking on Robertson, Carragher said: “Again, in the interest of balance I was scratching my head and asking who could reasonably challenge Robertson for this position? The answer is no-one. He has seven assists in the Premier League – second only to Trent Alexander-Arnold when compared to other defenders – and remains the outstanding left back playing in English football. To put it into perspective, Leicester’s Ben Chilwell and Everton’s Lucas Digne have three and five Premier League assists, respectively.”

Carragher heaped praise on Van Dijk and his partnership with Gomez. “Quite simply, one of the best players in the world,” said the Sky Sports pundit on last season’s PFA Player of the Year.

“Since moving to Liverpool, Van Dijk has been elevated into that sphere of players who could play for any side. He is so good, sometimes it feels he is taken for granted. Whenever the player of the year is debated, it is strange how few pundits put him forward. He has been as influential this season as he was last year and is another of the picks in this line-up no-one can argue against.

“How can I separate Van Dijk and Gomez? They have not lost a league game as a central defensive partnership, and in some games Gomez has eclipsed his senior partner.”

Liverpool’s defence has statistically been the best in the Premier League, conceding only 21 goals so far. Hence, the inclusion of Van Dijk, Gomez, Robertson, Alexander-Arnold is very much justified. Some might argue over Gomez’s selection but his performances since becoming a regular starter have been pretty good.

Liverpool captain Jordan Henderson has had a pretty impressive season so far and has been the pick of many pundits for the PFA Player of the Year. The 29-year-old did well in central midfield and also in the holding role when Fabinho was out injured. His passes, crosses, long balls are really good and having a leader like him on the pitch has been beneficial for Liverpool.

Carragher chose Henderson in his team, saying: “What is most impressive this season is the manner in which Henderson switched midfield roles. Until December, Fabinho was Liverpool’s best player and his injury could have been a critical moment in the title race. Instead, Henderson assumed the number six position and performed brilliantly. Maybe that is why more people have noticed his importance recently.”

Partnering the Red skipper are Manchester Cty’s Kevin de Bruyne and Aston Villa captain Jack Grealish. The former has shown how valuable he can be to his team when fully fit, amassing eight goals and 16 assists in the Premier League so far. Grealish has been Aston Villa’s silver lining this season and it won’t be a surprise if he leaves the club in the summer.

There have been some pretty good midfielders this season that include Wilfred Ndidi, James Maddison, Rodri, Mateo Kovacic and Jorginho, to name a few. However, the ones Carragher has chosen have done brilliantly in 2019/20 as well.

In attack, the former England international went for two Liverpool players on the left and right wings in Sadio Mane and Mohamed Salah. The former is among the contenders for the PFA Player of the Year with 14 goals and seven assists so far. Salah has shown glimpses of inconsistency at times but his numbers have been really good with 16 goals and six assists.

He has 20 goals in all competitions, remains in contention for the Premier League golden boot – which would be his third in three years – and has plenty of assists to go with it. He is a matchwinner who has helped Liverpool to the brink of their first title in 30 years.”

At centre-forward, Carragher opted for Manchester City’s Sergio Aguero ahead of Jamie Vardy who is currently the top scorer in the Premier League. This could be a selection many might argue with.

There have been some notable omissions from the Liverpool legend but all the players in his XI have been sensational this season. 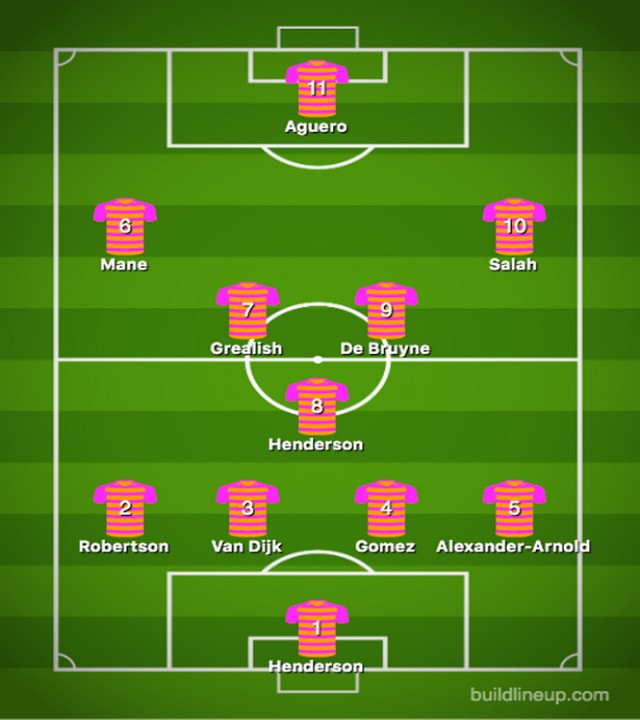