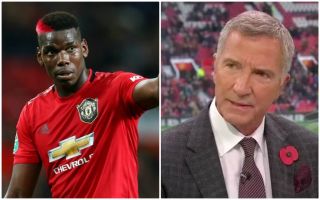 Pundit Graeme Souness has taken yet another dig at Manchester United midfielder Paul Pogba even though the football season is current on hold due to the coronavirus crisis.

The former Liverpool star is well known for singling Pogba out for criticism whenever he’s in the Sky Sports studio, and it’s become something of a ‘meme’ these days that the Scot will try to blame the Red Devils star for pretty much anything.

"Everyone is worried about how the coronavirus will affect football. But I'd say the virus Man Utd need to be worried about is Paul Pogba coming back into this team." pic.twitter.com/rk8ZoGJqHj

I’m lookin at Danny Drinkwater and I’m sitting here thinking: what’s Paul Pogba doing about this? He needs to take a look at himself here https://t.co/b7rDLGHig2 pic.twitter.com/IEwUCLqpUZ

The latest edition of this bizarre Souness-Pogba feud comes in a question-and-answer session in the Times, in which Souness describes Pogba as being focused only on himself, and saying he’d find him easy to play against.

The 66-year-old was a top player in his day, and while he admits Pogba has plenty of talent and the potential to be much better than he has been for Man Utd, he thinks his qualities mean he’d have found him a “doddle” to play against.

“Pogba has absolutely everything to be a top player — great athleticism, super technique — but his attitude to the game is the polar opposite of mine,” Souness said.

“He goes out with one thought in his mind: ‘I’m going to show everyone how clever I am today and be the star of the show.’ My attitude, the way I was taught, was: ‘Go out and work harder than the guy you’re in against and see where that takes you.’

“He’d be an absolute doddle to play against.”

It is fair to say Pogba has not really lived up to expectations at Old Trafford, but Souness’ strange fixation with the Frenchman does seem a little over the top.