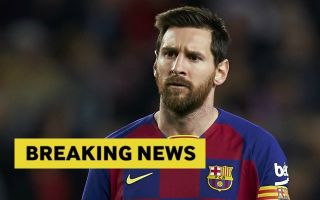 Barcelona superstar Lionel Messi has confirmed that he along with his teammates will take a 70% pay cut during the coronavirus epidemic, according to a report in Marca.

The Catalan giants are looking at cutting costs to maintain a positive financial status with losses expected on the financial front during the widespread epidemic and Messi has now confirmed that the Barcelona players have agreed to the club’s proposal for players to take a 70% pay cut.

The 32-year-old Messi has been at his usual best for Barcelona this season scoring 19 goals and racking up 12 assists for the Catalan club in La Liga before football was suspended in Spain.

Taking to Instagram to express his views about the pay cut, Messi released the following statement, as quoted by Marca:

“A lot has been written and said about the FC Barcelona first team in regard to the salaries of the players during this period of a state of emergency.

“Before anything, we want to clarify that our will has always been to take a pay cut because we understand perfectly that this is an exceptional situation and we’re always the first ones that have helped the club when we’ve been asked.

“We’ve even done it sometimes off our own back, [when] we thought it was necessary or important in other times.

“Therefore, it doesn’t surprise us that the club wanted to put us back under the microscope and try to pressure us into doing something we were always going to do.

“In fact, if the agreement has been delayed in the last few days, it’s simply because we were finding a formula to help the club and also our employees in such difficult times.

“On our part, the moment has come to announce that, as well as reducing our salaries by 70 per cent during the state of emergency, we’re going to make some contributions so that all the employees at the club can earn 100 per cent of their wages during this situation.

“If we didn’t speak until now it was because the priority for us was to find solutions that were realistic to help the club, but also those that are most affected by this situation.

“We don’t want to sign off without sending our best wishes and lots of strength to all Barcelona fans that are going through such hard times, as well as all those who are waiting patiently at home for the end of this crisis. We’re going to get out of this very soon and we’ll do it all together.” he added.

Many clubs across Europe are asking players to reduce their wages and take pay cuts so that clubs can operate during this prolonged spell without football, including Juventus in Italy and Hearts in Scotland.

The hope is that clubs can come out of this crisis with their financial statuses intact.