Manchester United look to have been given some hugely encouraging transfer news regarding their rumoured pursuit of Borussia Dortmund star Jadon Sancho.

The England international is one of the most sought after young talents in the game at the moment after a remarkable rise in the Bundesliga, and there’s been plenty of speculation about where he might end up next.

A leading agent, however, has talked up Man Utd and Paris Saint-Germain as being the only likely contenders for his signature, whilst also stressing that the player’s preference is for a return to England.

The unnamed agent, speaking to the South China Morning Post, said: “Liverpool are not in the market for £100million players and they don’t need him. I’ve dealt with Klopp – they’d rather pay half that amount for a player a step or two behind Sancho who they think they can improve.

“I’ve read the Chelsea speculation and I’m convinced that it’s the agents ramping up the talk to try and create an auction situation which would suit them and Dortmund.

“Chelsea will lose Pedro and Willian for nothing when the season ends. Roman Abramovich is more about patching the squad up now than breaking transfer records. They let Morata go and brought Tammy Abraham back on loan. They took Higuain on loan. They’re not going crazy any more.

“Real Madrid have enough players in his position. Barcelona need to cut their costs, not waste more on €100million-plus players after doing it three times. In my opinion it leaves Man United and Paris St-Germain, but Sancho wants to go back to England.

Jadon Sancho transfer to Manchester United looks most likely, according to a leading agent

“If United are clever they won’t spend €100 million on a player that Dortmund are ready to sell, more so if the markets are suppressed as I suspect they will be.”

Sancho would undoubtedly be a quality signing for United, as they look in need of a statement buy in attack after the disappointing performances of the likes of Alexis Sanchez and Jesse Lingard in recent times.

Still, Chelsea could no doubt be disappointed by this development, with the Blues also in dire need of a long-term replacement for Eden Hazard.

Callum Hudson-Odoi looks another similarly exciting young English talent, but Sancho seems to be quite clearly a level above his fellow countryman.

Liverpool needn’t be too bothered by this news as the Reds already have perhaps the best front three in world football in the form of Mohamed Salah, Sadio Mane and Roberto Firmino.

It’s previously been claimed, in the tweet below from Jan Age Fjortoft, that Sancho could cost as much as €130m, which could be a worthwhile long-term investment for United if he lives up to his enormous potential… 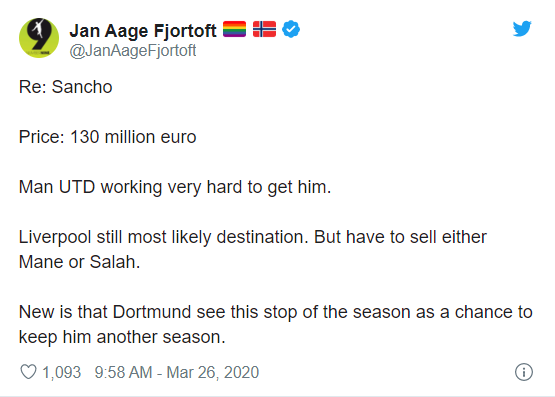