Throughout his career, Jurgen Klopp has always been identified in having a strong bond with his teammates. His brash, yet warming personality has seen him establish strong relationships with players down the years, with Liverpool being no different.

The German is simply adored by the Reds, with their fans loving his outlandish persona. His ability to create a demanding but spirited camp at Liverpool has been a major factor behind their success under his leadership, with his own team recognising this.

One player who epitomises what Klopp stands for at the club is Jordan Henderson, a member of the squad who has overcome adversity through nothing but hard-work and sheer desire.

The Englishman has been club captain since the German took charge back in 2015, with his game being taken up a level under his manager. 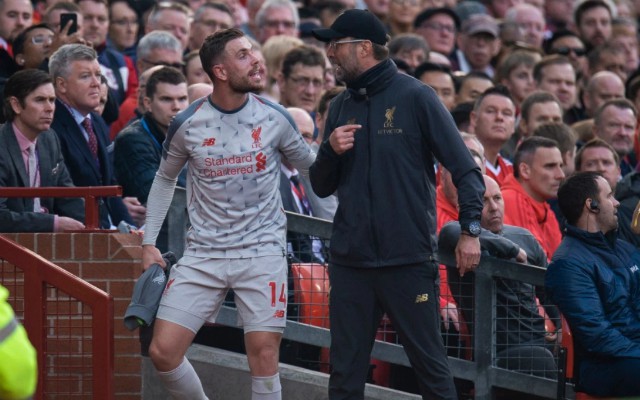 Klopp and Henderson have a strong relationship.

Henderson has recently been speaking about the club and most specifically, Klopp himself. In an interview with Sky Sports News, the England international lifted the lid on what’s been going on during quarantine: “We’ve been given our own training programmes to do, a bit like during off season when you’re on holiday doing your own stuff to keep ticking over.”

The midfielder also stated that the squad had been keeping in touch, with their manager even being included in the player’s group chat: “We’ve got a group chat so we’ve got all sorts of videos flying in with different challenges for us to do. So there’s a bit of banter and just normal stuff, really, so things are going well so far. Even the manager’s in the group chat!”

Liverpool fans will no doubt love to hear such news, as it further highlights the squad’s tightly knitted bond. We can’t imagine that many other Premier League managers are so included in their player’s lives as much as Klopp, and it’s simply a trait that has helped seen them storm to the title this season.

Currently sat on top of the league by twenty-five points, Liverpool are on course to break the all-time points record in the division, so long as the season is actually completed.

Their manager has instilled a winning mentality back at the club, creating a real community feel at Anfield, as opposed to your typical player-manager relationship.