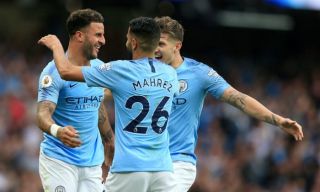 Manchester City full-back Kyle Walker is to be fined £250,000 by the club for breaking government rules and hosting a sex party with escorts, according to a report in the Mirror.

The UK government has imposed strict social distancing norms across the country in light of the outbreak of the coronavirus.

However, according to the report, Walker and his friend broke government rules to invite two prostitutes to his luxury apartment in Manchester for a sex party.

To top that off, shortly after the party, Walker took to social media to tell fans to lessen the burden on the NHS by staying at home, as reported by the Mirror.

The England full-back was quick to issue an apology but could still face heavy sanctions by City.

Walker who reportedly earns £110,000-a-week at City is to be fined what could amount to two weeks wages for his antics.

While issuing an apology for the incident on Saturday, Walker said:

“I want to take this opportunity to issue a public apology for the choices I made last week.”

“I understand that my ­position as a professional footballer brings the responsibility of being a role model.

“As such, I want to apologise to my family, friends, football club, supporters and the public for letting them down.”

“There are heroes out there making a vital difference to society at the moment, and I have been keen to help support and highlight their amazing sacrifices and life-saving work over the past week. My actions are in direct contrast to what I should have been doing regarding the lockdown.” he added.

Meanwhile, City issued a brief statement regarding the incident that read: “We are disappointed to hear the allegations, note Kyle’s swift statement and apology, and will be conducting an internal disciplinary procedure in the coming days.”

This report comes after news of Walker splitting up with his partner Annie Kilner earlier this year.

What can we say… There’s only one Kyle Walker.