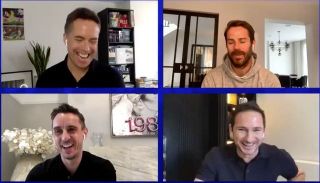 Chelsea boss Frank Lampard has jokingly had a brilliant swipe at Roy Keane after his comments on Billy Gilmour last month.

The 18-year-old put in a stellar performance against Liverpool in the FA Cup and followed that up with another top display against Everton days later.

His quality on the pitch drew praise from Keane who knows a thing or two about the central midfield role, and it led to him lauding the youngster for putting on a show.

Lampard was reminded of that when speaking to Sky Sports on Monday morning, and as seen in the video below, he had a hilarious dig at Keane too.

It left host Dave Jones and fellow guest panelists Gary Neville and Jamie Redknapp chuckling away as the Chelsea boss insisted he was just joking and reiterated Keane’s opinion carries weight given his playing career, with Lampard continuing to delight off the pitch with his candid and humorous interviews.

‘Roy Keane said he had to put his cup of tea down to work out who he was watching!’

‘I had to put my cup of tea down to hear Roy say something nice!’ ?? pic.twitter.com/w06Nf2mZhq