West Ham star Declan Rice has made the rather interesting choice of defending Paul Pogba on Instagram following recent transfer rumours linking him as a target for Manchester United.

The Hammers starlet is one of the most impressive young players in the Premier League and it was recently claimed that the Red Devils had been scouting him, according to the Daily Mail.

It’s easy to see how Rice could strengthen Man Utd in midfield, looking a potential upgrade on the likes of Nemanja Matic and Andreas Pereira in that area of the pitch.

Some United fans will therefore be interested to see that Rice took it upon himself to get into a little debate on Instagram and take the opportunity to defend MUFC ace Pogba amid ongoing criticism from pundit Graeme Souness in particular.

Rice will surely be aware of how United fans will see this, and that him aiming a dig at Pogba’s critics would surely make him popular with Red Devils supporters.

As seen in the comment below, the England international describes Pogba as a “ridiculous” player and one of the best in the world… 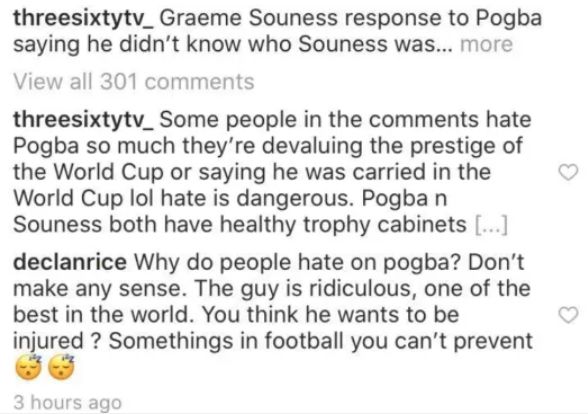