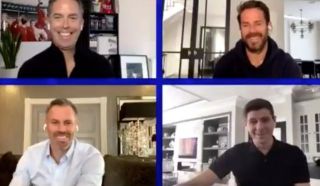 Former Liverpool pair Jamie Carragher and Steven Gerrard shared some brilliant banter as the latter was asked about his time at Anfield.

The Rangers boss appeared as a special guest on the Sky Sports Football Show on Thursday morning and appeared alongside Carragher and another ex-Reds ace in Jamie Redknapp.

SEE MORE: Why growing number of Premier League clubs want to finish season by June 30 ahead of key meeting

As seen in the clip below, Gerrard was asked who he learned from in terms of his free-kick technique, to which he replied: “A few different people, Jamie being one of them.”

Clearly referring to Redknapp who was known for being able to strike a ball sweetly, Carragher couldn’t help himself and chipped in by thanking Gerrard for the compliment.

However, the former Liverpool captain wasn’t done as he had a dig at his former teammate by jokingly noting that he was referring to the “real Jamie”.

That drew more chuckles from the panel as they enjoyed their catch up, and it’s good to see some fresh content being provided during the coronavirus lockdown to keep us all entertained.

?"Not that Jamie the real Jamie" ?