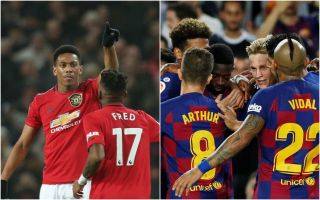 Manchester United are reportedly one of the clubs gathering data on Barcelona forward Ousmane Dembele as they weigh up a transfer swoop.

The France international has struggled with injuries during his time at the Nou Camp, but has long been considered one of the brightest prospects in world football.

According to Sport, this has led both Man Utd and Arsenal to take a close look at him and get as good an idea as possible about the nature of his fitness problems ahead of a potential move.

The report adds that Dembele himself has contacted fellow countryman Anthony Martial to ask about life at Old Trafford as it seems like he’s prepared to consider making the move to Manchester.

Both United and Arsenal need more quality up front, with the Red Devils linked with a host of other similar players in recent times.

Borussia Dortmund winger Jadon Sancho has been linked with MUFC by ESPN and others for some time now, while Jack Grealish has also been reported to be one of their top targets by The Athletic and others.

Still, if Dembele becomes available for a reasonable price, most top clubs would surely consider him, as the 22-year-old still has time to get his career back on track and become a major player at the highest level of the game.