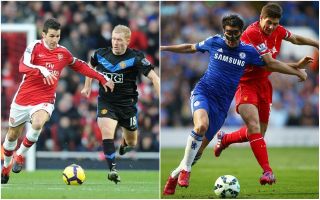 Former Premier League star Cesc Fabregas has given his take on the long-running debate on who is better out of Manchester United great Paul Scholes and Liverpool legend Steven Gerrard.

Fabregas was questioned for his thoughts on who the better player as part of a Q&A on his Twitter account.

The Spaniard hinted that the pair shouldn’t be compared as they are ‘different’ types of players, adding that he loves Scholes but that he was a massive ‘fan’ of Gerrard whilst growing up.

Fabregas believes that it’s a ‘tie’ between the two England greats.

Different type of players. I love Scholes and I think he is more my type of player but I was such a big fan of Gerrard growing up. Think it’s a tie ? https://t.co/GXRxcB16IR

Manchester United and Liverpool fans have been embroiled in this debate for as long as we can remember, with both sides offering several valid reasons in support of both.

Scholes won more trophies with a Man United side under Sir Alex Ferguson that were respectfully well ahead for their rivals for most of the midfielder’s playing career.

Gerrard on the other hand did achieve some success on the big stage, even though he perhaps didn’t have such a strong squad around him.

Perhaps we should follow Fabregas’ stance and agree that both Gerrard and Scholes are as formidable as each other, who are we to contest the opinion of a man who has faced off against both several times.