Paul Merson has detailed why he has enjoyed watching the way in which Bruno Fernandes has settled into life at Man Utd since his January arrival.

The 25-year-old has wasted little time in making his impact at Old Trafford, bagging three goals and four assists in just nine appearances since his switch from Sporting Lisbon.

SEE MORE: ‘Make him lift his game even more’ – Maguire expects Pogba to have positive impact on Man Utd teammate

While United boasted plenty of energy and solidity in midfield from the likes of Fred, Nemanja Matic and Scott McTominay, they arguably lacked the creative quality to make the difference in the final third on a consistent basis to offer enough service to their frontmen.

Fernandes has offered that by becoming the key link in the side, and that has earned him widespread praise with Man Utd enjoying an upturn in form too as they remain in contention for a top-four finish in the Premier League as well as the FA Cup and Europa League.

Merson has gone into specific detail about why he has been so impressed by the Portuguese international though, and it’s hard to disagree with the Sky Sports pundit.

“What I like about him is that whenever he gets the ball, first he looks forward. He always wants to look for that forward pass,” he told Sky Sports. “When you’re playing in front of 70,000 people, people have to remember that when you have a couple of bad passes, the name of the game is to keep on wanting the ball to make those passes.

“A lot of players hide, and sometimes don’t even realise it. With him, he doesn’t, he keeps getting it and giving it to people. They’re not 60 yard passes, he just gets it through the lines.

“I think he’s been outstanding, and I’ve loved watching him.”

It’s one thing being good to watch and another being decisive to make the difference for the side. Fernandes has seemingly ticked both boxes thus far, but the job is far from done as far as Ole Gunnar Solskjaer and Man Utd are concerned.

Time will tell if he can pick up from where he left off when the season resumes, while he’ll also have to adapt and find a balance with Paul Pogba back in the side too.

Nevertheless, given the technical quality, creative class and tactical awareness he has on the pitch which also saw him score freely at Sporting, it’s hard not to see Fernandes continue to flourish for Man Utd and be a leading figure in the side.

Meanwhile, when naming three players he can’t wait to watch again, Merson named Fernandes along with Kevin De Bruyne and Jack Grealish, and so clearly he rates the United man very highly. 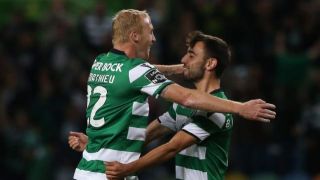