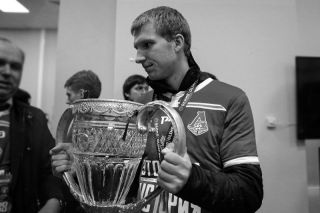 Lokomotiv Moscow have confirmed the sad passing of defender Innokentiy Samokhvalov after he became ill during an individual training session.

Many countries around the world are currently in lockdown as they continue to battle the coronavirus crisis which has claimed thousands of lives across the globe.

Football has been shut down since last month to try and safeguard and protect all concerned, and so players have been working individually at home to stay fit and healthy.

According to La Gazzetta dello Sport, Samokhvalov became ill during a training session with the report suggesting that he may have suffered a cardiac arrest, as per reports in Russia.

That has not been confirmed as of yet though and so we’ll know more when Lokomotiv announce further details, if they choose to do so, although as per their tweet below, they have confirmed the sad news that the 22-year-old has passed away.

It’s unclear at this stage if the tragedy occurred at his home or elsewhere, but despite not making an appearance for the senior side, as per the report above, he was a highly regarded individual at the club.

We are truly sad to announce the death of Kazanka defender – Innokentiy Samokhvalov.

He had a wife and a son.

Kesha was a kind, helpful person and a good friend. We are truly shocked by what happened and express our sincere condolences to his family and friends. pic.twitter.com/LgpcHMdB8d