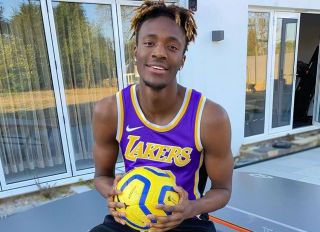 Chelsea striker Tammy Abraham has revealed he’s purchased a Teqball table and while he made fun of himself, Mason Mount decided to get in on the act.

It’s been a positive season for the 22-year-old, as he’s bagged 15 goals and six assists in 34 appearances for the Blues to date, which follows his successful loan spell with Aston Villa last year.

While he’ll hope to add to his tally when the season resumes having struggled with injuries prior to the suspension of the campaign, he’s having to keep himself fit and busy at home during the coronavirus lockdown like everyone else.

As seen in the image below, he showed off his new Teqball table on Monday, while joking that he can now “practice my first touch”.

Abraham perhaps expected digs from some of his followers as a result, but getting trolled by his own teammates probably wasn’t on the cards.

Christian Pulisic was first to pipe up in the comments section as he insisted what his Chelsea teammate really needs to do is “practice your jump shot”.

Mount was next, as he couldn’t resist the urge to have a dig as he commented: “Yeah you need it!” which had plenty of fans in stitches judging from the reactions posted.