Tottenham Hotspur star Son Heung-min has arrived for military training in his native South Korea, according to a report in the Mirror.

The 27-year-old Spurs forward is preparing to serve his mandatory military service and has arrived on the South Korean island of Jeju for the boot camp.

It is mandatory for South Korean citizens to undergo two years of military service as per government regulations. However, Son has been exempt from two years of service to undergo only three weeks of training instead after winning South Korea a gold medal at the 2018 Asian games. 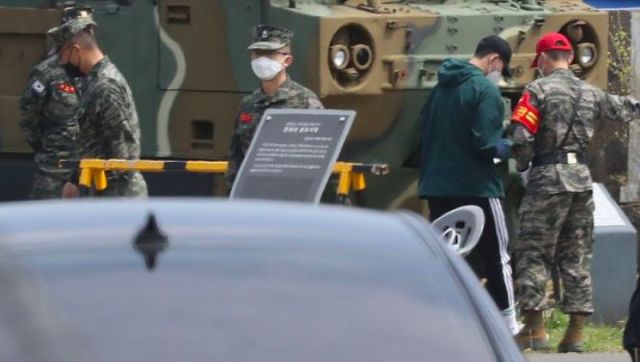 As seen in the picture, Son was seen talking to one particular military officer standing in front of a camouflaged military vehicle as he prepares to begin his training.

The Spurs star forward is set to join the 9th Brigade of the Marine Corps to finish his military service which runs until May 8.

Spurs released a statement on Son’s military service that read:

“The Club can confirm that  Heung-Min Son will commence his mandatory military service in South Korea this month.

“The forward arrived back in his home country at the end of March where he is currently in quarantine. Our medical staff are in regular contact as he concludes his recovery after fracturing his arm in our 3-2 win against Aston Villa on 16 February and continues to train.

“Son will return to London following the conclusion of his military service in May.”

Son has been in fine form for Spurs this season, scoring 16 goals in all competitions for the London club this campaign and will return to London for training once his military service ends.