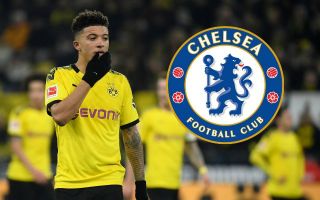 Chelsea’s pursuit of Jadon Sancho “has legs”, according to Dean Jones of Bleacher Report, but only if a transfer to Manchester United falls through.

The Borussia Dortmund star has long been linked with a big move away from Germany, and it would no doubt make sense that the Premier League’s top clubs were queuing up to bring him back to England.

Bleacher Report suggest Man Utd remain the heavy favourites for Sancho, but it could be that Chelsea are in line to capitalise if that move falls through for whatever reason.

Jones does suggest that United missing out on Champions League football could still be a factor in determining where the England international ends up next, so Chelsea fans will hope they can be quick to pounce if that ends up being an issue.

Sancho looks like he’d be an ideal signing for both clubs, with United clearly needing a long-term replacement for flops such as Alexis Sanchez and Jesse Lingard in the attacking midfield department.

Jadon Sancho has been linked with Manchester United and Chelsea

Chelsea, meanwhile, are yet to replace Eden Hazard after his departure last summer, with the Blues under a transfer ban at the time.

If they could get Sancho, the 20-year-old could be perfect to boost Chelsea’s attack for many years to come.