Gary Lineker has given a response to the Philippe Coutinho to Chelsea transfer rumours doing the rounds at the moment.

See below as the pundit admits he has to laugh at some of the phrasing in these stories, as he questions if Barcelona would really pick a limited number of clubs to offer a player to.

Lineker did this in response to Sky Sports News’ tweet, also pictured, that says the Blues had been offered the chance to sign Coutinho… 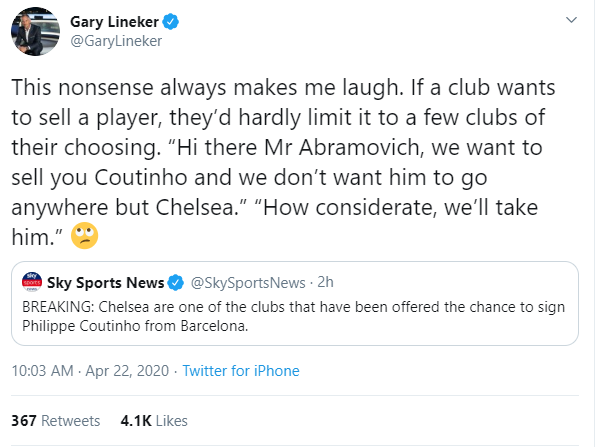 It remains to be seen if the Brazil international will end up at Stamford Bridge, but it could be a risky move for CFC given his big drop-off in form since he left Liverpool.

Coutinho was world class during his time at Anfield but has not looked the same player at Barcelona, or on loan at current club Bayern Munich.

The 27-year-old could, however, be a fine signing for Chelsea if he gets back to his best, with Frank Lampard in need of a replacement for Eden Hazard.

As Lineker says, however, perhaps there is something a bit iffy about the transfer gossip circulating at the moment.