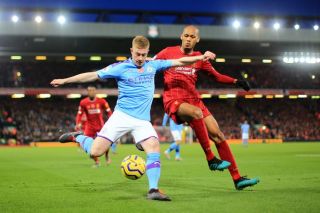 For those hoping for a quick return to Premier League football and other major leagues around the world, there’s been some encouraging news from Italy today.

The chief health official in Italy has suggested that there isn’t enough contact in football for it to be considered a high risk in terms of spreading coronavirus.

MORE: Uefa suggest two ways to complete Premier League season: What it means for Liverpool, Chelsea, and others

As quoted by Football Italia, Franco Locatelli said: “I don’t think a football can represent a vehicle to spread coronavirus when there are 22 players, plus six who could come off the bench and three referees.

“You need solid contact and this doesn’t seem solid enough.”

This certainly sounds hopeful, even if one imagines games will have to be played behind closed doors for a while longer as large crowds seem to be where the virus thrives.

Video: Foden in the right place to put Man City 2-1 up v Bournemouth

Many countries have imposed strict lockdowns to deal with this crisis, but it could be that that doesn’t mean it needs to put a stop to football returning at some point later this year.

BBC Sport have reported on rugby being able to continue in Australia next month, and that’s a game that certainly involves a lot more contact than football.

During these testing times, having sport to follow from home could be a big lift for people’s mental health and make the days go just that little bit faster!