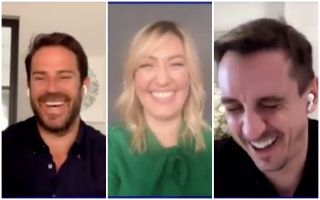 Sky have continued running their daily ‘Football Show’ during the coronavirus crisis, giving football fans some fresh content to keep them busy during the lockdown.

SEE MORE: Video: ‘His missus is looking on Google’ – Carragher has hilarious dig at Oxlade-Chamberlain in Sky Sports quiz

It has led to countless digs and swipes from various pundits and some hilarious moments, but Cates may well have just delivered the best of the lot.

During a conversation about which Sky pundit would Neville most want to be stuck with in lockdown, he naturally took his chance to have a pop at Carragher by insisting that it wouldn’t be him.

When he turned it round and asked Cates who she would want to be stuck with, she responded: “I’d honestly rather be on my own”.

Both Jamie Redknapp and Neville were left in stitches after her answer, and if anything deserves to go viral today to get a laugh out of people, it’s this…

.@KellyCates ?"Which Sky pundit would you most want to be stuck with in lockdown?"

.@Gnev2 ?"I can tell you who it wouldn't be, @Carra23 he's like an incessant squeal in your ear" @KellyCates ?"I'd rather be on my own" pic.twitter.com/WOcYVTWPKJ