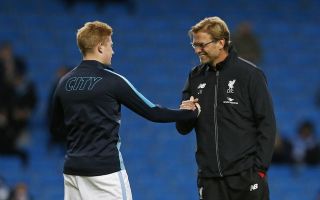 Manchester City maestro Kevin de Bruyne has named Liverpool superstar Sadio Mane as his pick for the PFA Player of the Year, the Belgian was quizzed by BT Sport on who should lift the prestigious honour.

The PFA awards were scheduled to take place this weekend, but mass gatherings are now being called off due to the Coronavirus pandemic.

De Bruyne believes that Mane has been the ‘total package’ for Liverpool this year, the Senegalese star has been key to the Reds running away at the top of the league.

Jurgen Klopp’s men are 25 points ahead of Manchester City, and should the season resume, the Merseyside outfit would need just six points to mathematically secure their first league title in 30 years.

Here’s what De Bruyne had to say to BT Sport:

“I would say Mane. I think he has been the total package this year for Liverpool.”

“He has been important, so if I had to choose somebody, I would choose Mane.”

Mane has 14 goals and nine assists for Liverpool in 26 Premier League appearances this season, even the forward’s phenomenal stats often don’t do him enough justice.

During his time at Anfield, Mane has always shown that he’s capable of providing during big moments for the Reds.

It’s great to see De Bruyne championing arguably the best pick for the PFA Player of the Season award, the midfielder could have easily shied away from praising a rival by picking one of his City teammates.