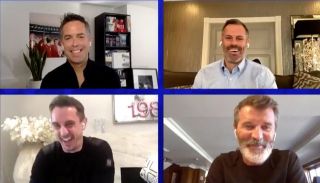 Never one to be shy with his opinions, the 48-year-old covered a number of topics and did so in his usual brilliant fashion with some no-nonsense answers.

SEE MORE: Video: ‘His missus is looking on Google’ – Carragher has hilarious dig at Oxlade-Chamberlain in Sky Sports quiz

From calling out the big clubs for putting pressure on players to take pay cuts to rattling host Dave Jones after he asked about his beard, to addressing a ‘bust-up’ with Wayne Rooney during their time together at United, he covered it all.

There was even a not-so-subtle dig at Man Utd and particularly Sir Alex Ferguson and David Gill over contract negotiations during his time at the club.

While we’re all stuck indoors during the coronavirus lockdown, we all need some more Roy Keane on our TVs as the best bits of his entertaining chat with Gary Neville and Jamie Carragher can be watched below…

Note to all: Never ask Roy Keane about his beard #SkyFootballShow pic.twitter.com/IR3ARbNaJ4

?"These clubs are the first to tell you this is a business, the billionaires in the background are ruthless, shrewd people then they come discussing cash flow problems, I've heard it all before"

Roy Keane ?"I told him where to go, I didn't respect Wayne because he wanted to watch the X-Factor"@GNev2 ?"I wanted X-Factor on to be fair"

?"There's a lot of players I didn't miss one bit. I'm old school and grumpy, I didn't get @WayneRooney or @rioferdy5 banter"

Roy Keane on his final years at Manchester United pic.twitter.com/PFQLSX6ikx