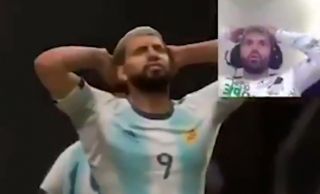 Manchester City striker Sergio Aguero produced the exact same reaction to missing a chance as his FIFA character did!

Watch the amusing video below as the Argentine streamed his FIFA game on Twitch, and missed a good chance with the virtual Aguero…

Aguero reacted the same way as his FIFA character after missing ?

Clearly, the programmers of FIFA get the details right, as both Agueros reacted in just the same way in perfect sync!

A pretty hilarious moment, but hopefully it won’t be too long before we see the real Aguero, and indeed all our favourite Premier League stars, back on the pitch.