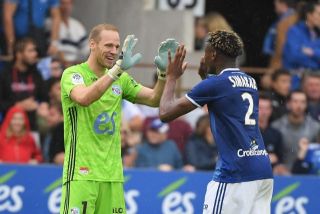 While it seems unlikely that many big transfers will happen this Summer, we might still see a few moderate fees being paid as the bigger clubs take a chance on some younger players who’ve shown promise.

Strasbourg defender Mohamed Simakan enjoyed a breakthrough campaign this season, and a report from RMC via Get Football News France has suggested his club will be looking to sell him this Summer.

There’s plenty of interest too, with AC Milan, Borussia Dortmund and Spurs being among the biggest names mentioned. It doesn’t sound like the French club have revealed their demands at this point, but a fee of €15m has been touted in the report.

It seems interest from clubs is at different phases just now, with Dortmund sending scouts to watch him regularly, Spurs have made enquiries into his situation while it’s suggested that AC Milan actually opened talks with the player in the Winter.

Although Dortmund seem to be the furthest away, the report suggests that Simakan would prefer to move to Germany so perhaps he will wait to see if that interest goes anywhere.

The report also indicates that some clubs are hoping the current situation will drive his price down if they wait, so it might be some time before a deal is reached.