Chelsea could be fielding a rather different XI next season if recent transfer rumours are to be believed, with manager Frank Lampard clearly keen to strengthen in a few key areas.

This is perhaps unsurprising as the Blues boss has had a challenging first season at Stamford Bridge, with the club under a transfer ban when he took over, having just sold their best player in Eden Hazard.

Hakim Ziyech has already been secured from Ajax for next season, but it looks like Lampard isn’t finished there as Barcelona misfit Philippe Coutinho is reportedly lined up as another player who could help replace Hazard, while Willian nearing the end of his contract will surely also be playing on the manager’s mind.

According to Sport, Chelsea look to be closing in on Coutinho, and while the Brazil international might be a bit of a gamble after his struggles at the Nou Camp, if he can get back to anything close to his Liverpool form, he’s sure to be a hit in west London.

Joining him and Ziyech in a new-look front three could be Arsenal striker Pierre-Emerick Aubameyang.

According to the Daily Express, Chelsea are one of the teams in for the prolific Gabon international, with Arsenal pulling out of contract talks and preparing to sell him for £56million.

Aubameyang is also linked with other top clubs in that report, but CFC look in particular need of a new striker after the struggles of the likes of Tammy Abraham, Michy Batshuayi and Olivier Giroud this season.

If Aubameyang can continue to find the back of the net as consistently as he has at Arsenal, he’ll be a superb addition for Chelsea in a problem position, and should shine with creative stars like Ziyech and Coutinho alongside him.

Going back into the defence, the Sun link Chelsea with a strong interest in Leicester City left-back Ben Chilwell, who would undoubtedly be an upgrade on unconvincing duo Marcos Alonso and Emerson Palmieri.

And finally, Ajax goalkeeper Andre Onana was recently tipped to be on his way to Chelsea by Voetbal Nieuws.

The Cameroonian shot-stopper would surely be an upgrade on Kepa Arrizabalaga after the Spanish ace recently lost his place in Lampard’s side, and overall this looks a hugely-improved XI to be lining up at the Bridge next season… 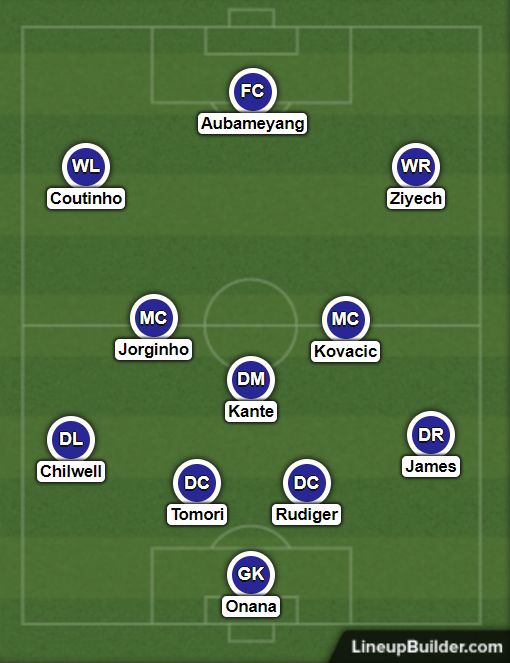