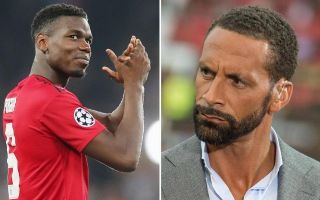 Manchester United legend Rio Ferdinand has offered some useful advice that Red Devils midfielder Paul Pogba would probably do well to take on board.

The France international has had a difficult spell at Old Trafford since his move from Juventus in 2016, and most fans would probably agree by now that it might be best for him to move on.

Still, Ferdinand has also suggested one way for Pogba to improve his reputation, and that would be for him to speak directly to the press more, rather than letting his agent Mino Raiola do so much of his talking for him.

Speaking to The Beautiful Game podcast in the video below, Ferdinand praised Pogba, but suggested Raiola’s outbursts to the media are the real problem.

“I love Paul, because he’s a great kid. I’ve known him since he was a young boy and I still chat to him now,” he said, as quoted by the Manchester Evening News.

“But the only problem I have with Paul is he should chat instead of his agent chatting. If he did that there would be more clarity on the whole situation.

“I spoke to him about all that type of stuff but Paul’s his own man and he’s going to deal with it his own way, I respect that, that’s fine. So that’s the only thing I’d say.”

The MEN also cite the various ways in which Raiola has had public spats with United over Pogba, so it’s hard to argue with Ferdinand’s overall point.

It will be interesting to see if there’s still some hope of Pogba rescuing his MUFC career.