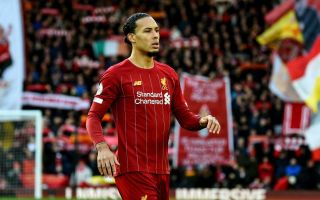 Liverpool defender Joe Gomez has praised teammate Virgil van Dijk for the influence he’s had on him and lauded his all-round personality.

After initially struggling to break back into the starting line-up at the start of the season, the 22-year-old has re-established himself next to Van Dijk in the heart of the Liverpool backline since December.

The pair have been a major factor as to why the Merseyside giants boast the best defensive record in the Premier League having conceded just 21 goals in their 29 games, and that in turn has put them in a commanding position to land the title this year.

While Van Dijk has emerged as the top defender in Europe since his switch to Anfield, Gomez has offered some insight into what the Dutchman offers both on and off the pitch and the relationship that the duo have built during their time together at Anfield thus far.

“I’ve said it before, but the stature of Virgil before he came to the club was massive,” he told Sky Sports. “I was a young centre-back, hadn’t really gotten as many games there [at Liverpool] as I would have liked but as soon as he came in, he reached out with open arms and we formed a bond straight away.

“The fact that he is a down-to-earth person off the pitch, we get on really well and we have a great relationship. We talk and in times like this, we FaceTime and speak about general things so that helps on the pitch when you have an understanding. He’s your mate at the end of the day.

“Sometimes he gives me an earful, but it’s a massive help and a confidence booster just having someone like him beside you. When there’s a one on one battle, you know he’s going to dominate, he doesn’t really lose headers at all.

“Just having him alongside you and his presence, it’s not just me, it’s the whole team and the stadium, when Virgil goes down, I think there is a bit of a gasp and a worry but he’s a real dominant force and a pleasure to play alongside.”

With Van Dijk still 28 years of age, Liverpool boss Jurgen Klopp will arguably hope the pair can steer clear of injuries and form a dominant partnership for years to come rather than have to look to the transfer market to reinforce that area of his squad.

Having already built up a great understanding and with the Dutchman seemingly continuing to have a positive influence on his defensive partner, things could potentially just get better between them on the pitch moving forward while Gomez continues to improve, develop and mature with the help of his teammate.