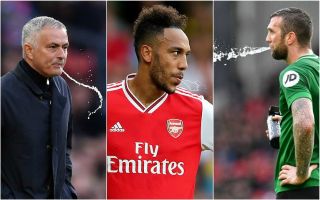 Premier League players should be given yellow cards for spitting if football can return to action, says FIFA medical expert Michel D’Hooghe.

Major leagues all over the world have been put on hold due to the coronavirus crisis, but there seems to be growing momentum behind a return to action in the summer.

MORE: K-League set for May 8th return but strict rules offer glimpse of what’s to come in Premier League

One imagines, however, that if football can restart it will be in a very different manner to what we’re used to, with empty stadiums and other controls in place to ensure the game can be played safely.

According to the Telegraph, FIFA Medical Committee chairman D’Hooghe has suggested spitting is one thing that could be stamped out of the game to help prevent the spread of the virus.

He even suggested yellow cards could be handed out to players for spitting, in order to do as much as possible to incentivise them not to do it.

“This is a common practice in football and it is not very hygienic,” D’Hooge told The Telegraph.

“So when we start football again I think we should have to avoid that at maximum. The question is whether that will be possible.

“Perhaps they can give a yellow card. It is unhygienic and a good way to spread the virus. This is one of the reasons why we have to be very careful before we start again. I am not pessimistic but I am rather sceptical at the moment.”