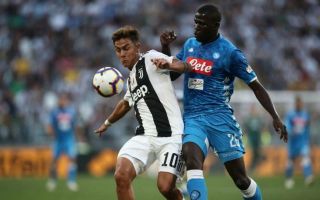 Tottenham could reportedly have a key edge over other clubs in the battle to seal the transfer of Napoli centre-back Kalidou Koulibaly.

The Senegal international has shone in Serie A for many years now, and looks like he’d be an ideal signing for most top Premier League clubs.

MORE: Man United tipped to sell star for a lower price due to Covid-19 crisis

Manchester United have previously been strongly linked with Koulibaly by Corriere dello Sport, but it seems like Spurs could now be strong contenders for his signature.

That’s because, according to Gianluca Di Marzio, speaking to Sky Sports, Tottenham’s chairman has a good relationship with Koulibaly’s agents.

The 28-year-old is expected to end up in the Premier League, with Di Marzio saying it’s highly likely he arrives in England, with Everton mentioned as another possible destination, perhaps due to the Carlo Ancelotti connection as the Italian tactician worked with him at Napoli.

Kalidou Koulibaly has been linked with Tottenham, Manchester United, Everton and Newcastle

United could still do with another defensive signing alongside Harry Maguire, with Koulibaly surely an upgrade on the likes of Victor Lindelof and Eric Bailly.

Still, Tottenham also need to give Jose Mourinho the backing to build his own side after a slow start to life with the struggling team he inherited from Mauricio Pochettino.