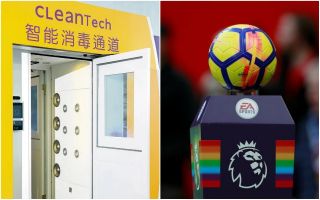 There could well be the technology in place to allow fans to safely enter Premier League stadiums.

According to a report from the Sun, sanitising tunnels could check fans upon entering a ground, taking their temperature and having any germs lingering on them killed by UV light and a special sanitising spray.

There has been a lot of debate about whether football can possibly restart amid the coronavirus pandemic that is gripping the globe, but at the moment there seems to be some growing optimism that it can be done.

The Daily Mirror report on the Premier League aiming to start up again by June 13, and it’s easy to see how the return of football to watch on TV could be crucial for improving the mental health of people stuck at home during this difficult period.

Games would likely be played behind closed doors for some time, but the Sun’s report details how sanitising tunnels at stadiums could allow fans to get in.

It would be challenging to implement and would surely mean a lower number of supporters in attendance, but the report claims the process in these tunnels can be completed in just 12 seconds.

This technology is similar to the kind of thing people have to go through at airports, so it might be that we get used to it surprisingly quickly.

If people attempting to get into the ground have a temperature, they would then not be allowed to go through, but one imagines this could still present a lot of issues.

France announced yesterday that football has been cancelled until August, so it might be that other countries will soon follow suit, even if the Mirror suggest we could see football in England again this summer.