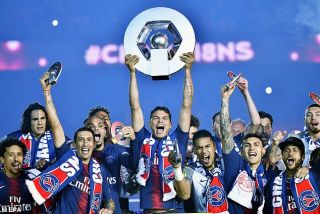 Paris Saint-Germain are reportedly set to be crowned Ligue 1 winners and awarded the title despite the season not being completed due to the coronavirus crisis.

According to the Daily Mail, PSG have been crowned champions despite the season ending early although any potential relegations are to yet to be confirmed while the way in which European places will be determined is also yet to be signed off.

As per L’Equipe reporter Domenighetti Joel in his tweet below, it will be determined on a points-per-game basis.

With 11 games to go, the reigning French champions sit top of the table with a 12-point lead over nearest rivals Marseille, and so while mathematically it’s not yet done, it’s a sizeable lead that they would have felt confident about being enough to secure the title if the season could be completed.

It comes after it was announced on Tuesday by French PM Edouard Philippe that games will not be given the green light to take place until September, even behind closed doors, as the country continue to battle the coronavirus crisis.

In turn, with the French government stepping in and giving them no choice, it effectively ended all hope of football resuming in the coming months just as planned in Germany and elsewhere, while the Premier League have yet to make any announcements of their own.

Given the UK is still just coming out the other side of the peak of the crisis and with no detailed plans as of yet on what the next stage of the lockdown looks like, it’s unlikely a decision will be made for another week or two.

However, if the decision in France is shared here, that would likely mean that Liverpool will be awarded the Premier League title  which will be a huge boost rather than the threat of the season being considered null and void.

Time will tell if that’s the case or not as each country and governing body will be different, and while there is nothing official as of yet, it’s widely suggested that PSG will be handed their third consecutive Ligue 1 title despite not finishing the season.