The Atletico Madrid star has been persistently linked with some of the biggest clubs in Europe. Manchester United and Arsenal, amongst others, have been understood to be keen on signing the 26-year-old.

MORE: One Man United icon will look a whole lot different next season

According to reports in his native Ghana, via the Metro, Partey would prefer to join Manchester United. The midfielder’s father suggested, as quoted by the Metro, that there were transfer talks going on between Atletico and the Gunners – denied by his agency.

The Metro note that his contract involves a £47million release clause; with this in mind, it is no wonder that plenty of clubs are rumoured to be interested in him, especially as he’d surely be an upgrade on most of the midfielders currently on the books at both Arsenal and United.

JJ Sport Managers SL, Partey’s agency, made it fairly clear that the player isn’t going to remain at the Wanda Metropolitano. They shared an image – created by Transfermarkt – on their Instagram story, encouraging supporters to decide their client’s next team. Bayern Munich, Juventus, Paris Saint-German, Arsenal and United were considered to be Partey’s options —and the chance of Atletico Madrid renewing his contract wasn’t mentioned. 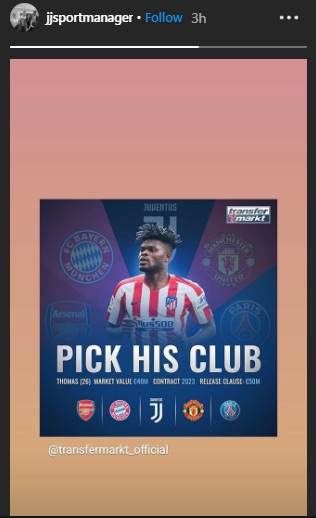 The agency issued a statement: “Concerning the publication that was made today, Wednesday, April 29, 2020, on our Instagram account, regarding the future of our player Thomas Partey, from J.J. Sport Managers [sic] we want to convey that this publication was not approved by the management of the company.

“An internal investigation has been launched to find out what may have happened, we are certain that this was not intended by any of our workers and is probably an unfortunate mistake.

“The publication was removed as soon as we were aware of its existence, and the passwords to all of our social profiles have been modified to restrict access only to essential personnel.

“With this statement we want to give a little clarity to possible misunderstandings that may occur.”