The Premier League held talks on Friday aimed at planning out a return to action along with several other top sports in the UK to bounce back after the coronavirus lockdown.

The current season has been suspended since March 9 with the last game being played between Leicester City and Aston Villa, as the virus arrived in the UK and hit its peak last month.

As the numbers continue to suggest that we’re now coming out the other side, PM Boris Johnson is expected to outline plans on how the UK will come out of the lockdown in the weeks ahead although various measures will likely remain in place to avoid a second wave.

Nevertheless, as per the Financial Times, chief medical officers at British sporting bodies met with government officials on Friday to discuss the idea of hosting events in ‘bio-secure’ locations when lockdown measures are relaxed.

The Premier League is said to potentially be plotting a return ahead of other competitions, although much will depend on the government’s guidance on the matter.

The 20 clubs are said to have held talks over playing the remaining games behind closed doors from as early as June 8 onwards, and it’s imperative for many that such a plan goes through given that there’s £762m worth of remaining payments from broadcasting contracts still sitting on the table.

Naturally, they would still have to take the hit in terms of matchday revenue and ticket sales, but with that looking unlikely to return to normal for some time, it’s not something that they can wait around for. 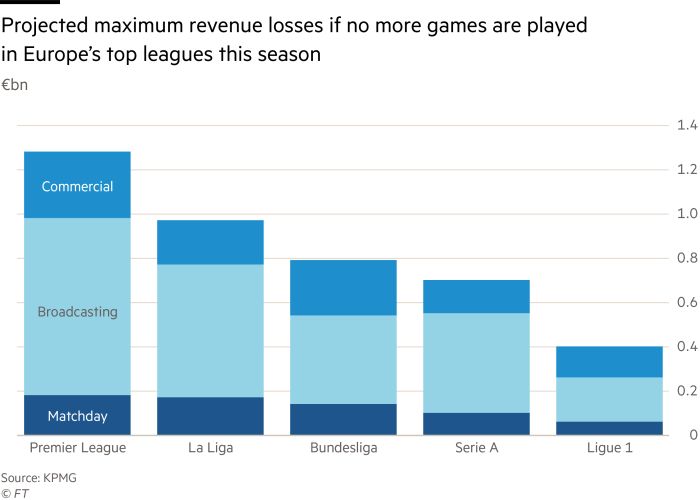 Image courtesy of the Financial Times.

While Ligue 1 announced this week that the season was over and places were assigned as well as the title to Paris Saint-Germain, the gulf in revenue losses in the chart above shows why it’s imperative for Premier League clubs to finish the season.

The same could be said of Real Madrid and Barcelona and the rest of La Liga as well as the Bundesliga who have both suggested plans are in place to complete the season with training resuming later this month, while Serie A could follow suit.

However, as far as the Premier League is concerned, from undermining club’s advertising deals at neutral venues to problems with broadcasting losses and plans on how to show the remaining games with giants like BT and Sky dealing with subscription losses, there are a number of obstacles that must still be overcome before the campaign gets back underway.

While fears remain over a second wave with fans perhaps congregating outside of stadiums instead, the Bundesliga is said to likely be the example to follow for other leagues with intentions of completing their seasons as they’re ahead in their planning.

Strict hygiene protocols with regular testing of all those involved in a game, with around 230 tipped as the likely number on any given matchday, the Premier League could privately fund testing kits and get the domestic campaigns done before UEFA competitions such as the Champions League and Europa League will be completed in August.

Rugby and cricket are likely to follow later in the summer towards the autumn, but with warnings that a premature return for sporting events could contribute to a second wave of the coronavirus pandemic, any plans for the Premier League to lead the return of sport in the UK will need to come with strict measures to ensure the safety of all concerned.