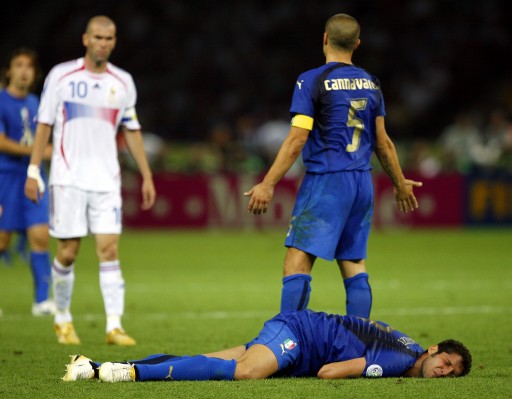 It’s one of the most infamous moments in World Cup history, and it also happened to be Zinedine Zidane’s final act as a professional player.

After a heated exchange in the 2006 World Cup final between France and Italy, the French midfielder reacted to something he’d heard from Marco Materazzi, and as he stepped forward, he delivered a powerful headbutt which knocked the Italian off of his feet.

Zidane would be sent off of course, but Materazzi’s team-mate, and Italy captain, Fabio Cannavaro, has appeared to give Zidane the thumbs up.

‘I have to be honest, I only remember the noise,” Cannavaro said during an Instagram Live interview and cited by the Daily Mail. “I was nearby I turned and I saw Marco on the ground.

“I heard this noise and Marco said “he headbutted me”.

“Was it sore? Beyond that, he did what he had to do. He threw himself on the ground. Goodbye and thank you. But it was a good headbutt.”

Although the headbutt overshadowed the game itself, Italy can be satisfied that it was they and not the French who went on to lift the crown.

Given that Zidane was a talisman for Les Bleus and would’ve almost certainly taken a penalty in the shoot-out which followed extra-time, that split second when he allowed the red mist to descend could be said to have been the key moment in the match.