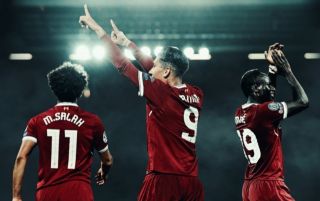 With footballers often exposed to difficult questions being posed by reporters, their words can sometimes be taken out of context, but one Liverpool striker has left a broadcaster in no doubt as to his intentions.

The Reds have enjoyed another magnificent season and are on the verge of their first English top-flight title in 30 years, with Roberto Firmino, Sadio Mane and Mo Salah all playing their part again.

Back in February, Gary Neville told Sky Sports and cited by talkSPORT, that Salah was probably using the Anfield outfit as a stepping stone to either Barcelona or Real Madrid, and it was the Egyptian’s response to a question posed by the official Sky Sports Twitter account on Saturday, and detailed by the Daily Star, that finally seemed to put paid to that notion.

Sky Sports used a picture of Salah and asked readers ‘keep or sell?’

Replying with three crying emojis, it’s safe to say that the front man sees the humour in the question and has no intention of departing Merseyside just yet.