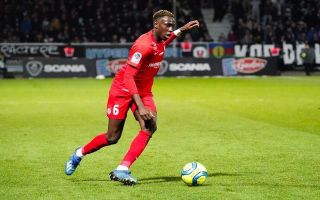 Montpellier midfielder Junior Sambia has been discharged from intensive care after a fight against the coronavirus, according to a report in Get Football News France.

Sambia contracted the dreaded virus last week and was placed under intensive care in the Arnaud-de-Villeneuve hospital in Montpellier on Thursday.

Sambia was then placed in an artificial coma for his own safety after testing positive for the coronavirus.

However, the 23-year-old midfielder has since been discharged from the ICU and will return home now after beating the virus.

“I am not a doctor, it is not up to me to talk about it but he gave us a big fright last week. We were affected and pained alongside the players.”

“He called me on Tuesday or Wednesday and it was a real pleasure to hear his voice. Now, he is feeling good, he is due to leave hospital. He needs to rest but he is doing better.”

This news comes shortly after news that the French Ligue 1 was ended due to the coronavirus with Paris Saint-Germain declared champions.

The Montpellier midfielder Sambia can certainly count himself lucky for beating the virus and his family must be relieved that he can now return home safely after battling for his life in intensive care.