According to Goal, Chelsea star Pedro has admitted in an interview with Spanish radio station El Larguero that he has offers from ‘many’ places, the winger’s contract expires this summer.

Pedro hasn’t shut down the possibility of signing a new deal with the Blues, as he admits that the Coronavirus pandemic has left him ‘waiting for a meeting’ with Chelsea to discuss his future.

The 32-year-old attacker did suggest that he is ‘open’ to listening to the offers that he has one the table until he can hold discussions with Chelsea.

Goal claim that Italian giants Roma, La Liga side Real Betis, MLS outfits Inter Miami and New York City are all interested in signing Pedro on a free transfer, as well as Japanese side Vissel Kobe.

Goal express the most about Betis’ interest in the Spain international, with the report suggesting that the La Liga side are keen on bringing the talent back to his homeland.

It’s added that Betis would offer Pedro a salary similar to star man Nabil Fekir and that they’re even planning on offloading some players to raise the funds needed to sign the wide man. 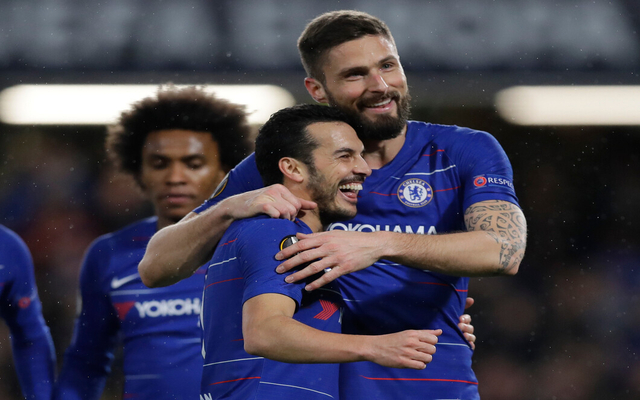 Like Pedro, Olivier Giroud and Willian have been heavily linked with exits this summer.

Here’s what Pedro had to say to El Larguero regarding his future:

“The coronavirus situation affected everything, so at the moment we are waiting for a meeting with Chelsea.”

“I know that the contract is concluding, but we have not yet sat down to discuss whether to renew and continue here or not.”

“I’m waiting for the meeting with the club, but am also open to listening to other offers. The priority right now is completing my contract, then we’ll see what happens.”

The ace also remained coy when quizzed about a potential return to Spain:

“I don’t know, I really don’t know. I have offers from many places and I’ll evaluate what to do next. The truth is, I don’t know what’s going to happen.”

Due to the financial impact of the Coronavirus pandemic on football clubs, teams may be focusing on low-cost transfers and free signings in the next window.

Goal add that due to the unlikeliness of the Premier League finishing by 30 June – when Pedro’s contract ends, Chelsea could find themselves in a sticky spot as the star could agree a pre-contract elsewhere.

Pedro has experienced a less important first-team role with the Blues this season, the former Barcelona star has made 18 appearances across all competitions this term.

Due to Chelsea boasting young stars Christian Pulisic and Callum Hudson-Odoi, as well as the upcoming addition of Hakim Ziyech, it seems as though Pedro’s time as a key player for the Blues is over.

Pedro is still very much the calibre of player that would help a side trying to push forward like Betis, he’d also be a marquee signing for any clubs in less popular leagues like the MLS.