According to Goal, Ajax manager Erik ten Hag has told Algemeen Dagblad that the Dutch outfit have a transfer ‘agreement’ in place with Chelsea and Barcelona target Andre Onana.

Ten Hag hinted that Ajax have already discussed with the ace the ‘steps’ they will take if the ‘right club comes in at the right price’ for the Cameroon stopper’s services.

Goal claim that Barcelona are interested in signing the 24-year-old – who spent several years in their world famous La Masia academy.

The report also adds that Chelsea have identified the ace as a potential replacement for Kepa Arrizabalaga, it’s added that Onana’s services will command a fee of around £25m ($31m).

Ten Hag’s comments hint that Ajax are prepared to allow the shot stopper to leave due to their apparent transfer agreement with the ace. 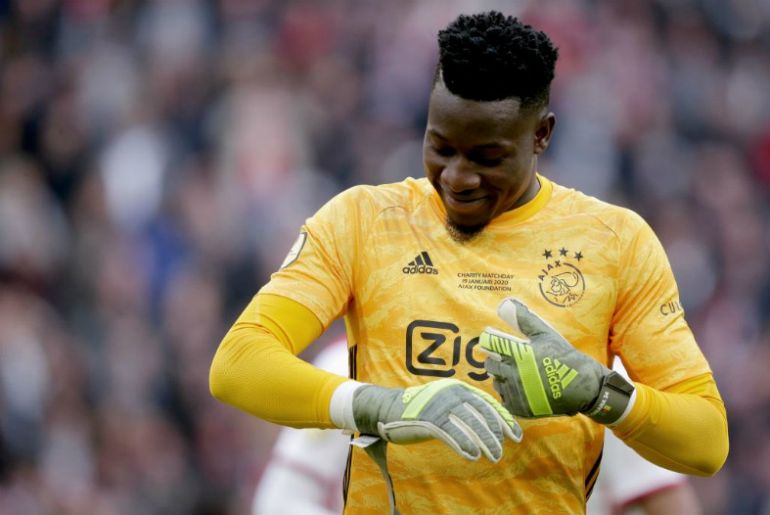 Here’s what Ten Hag had to say on the stopper’s future:

“Andre is very important to us and of course we don’t want to lose him,”

“But it’s true that we have an agreement from last year about the development scenario and what steps we will take if the right club comes in at the right price.”

Ten Hag did confirm however that the side are yet to receive any ‘concrete’ bids for the ace yet:

“As far as I know, no concrete offer has been made to Ajax.”

Confirmation of the ‘agreement’ comes not long after Spanish publication Sport reported that Onana decided to stay after offers last year if Ajax guaranteed that he could leave this summer.

Onana has a potentially difficult choice on his hands, the stopper can either return to Catalonia – a place which he’s described as his ‘home’, as per RMC Sport or move to the Premier League.

Were Onana to move to the Blues, it’s fairly realistic to assume that he’d have a better chance at being first-choice goalkeeper than he would at Barcelona because of the world-class Marc-Andre ter Stegen.

Fortunately wherever the Cameroonian moves, it seems as though he will have everything in place to settle quickly and hit the ground running.

At Barcelona, he’d be returning to his former club and be reunited with Frenkie de Jong, with Chelsea, he’d have the chance to settle in to the team alongside new signing Hakim Ziyech – who will arrive this summer.