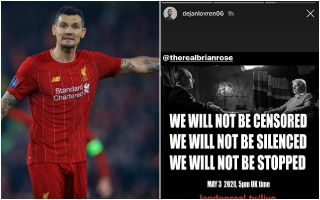 Liverpool defender Dejan Lovren may have landed himself in hot water after some of his recent social media activity suggests that he supports conspiracy theories regarding the Coronavirus pandemic.

The centre-back appears to be of the belief that the Covid-19 crisis, which as per the Guardian has led to over 247,000 deaths, is a ploy to force the public into taking vaccines.

The Croatian star even aimed a bizarre swipe at Microsoft co-founder Bill Gates on social media, replying with ‘Game over Bill. People are not blind’ to a post thanking healthcare workers.

This is very much just the tip of the iceberg, the 30-year-old (yes 30-year-old) also promoted and shared one of the latest videos from conspiracy theorist David Icke on his Instagram story.

BBC News report that Icke’s YouTube channel was deleted after he shared unfounded claims that Covid-19 was linked to 5G mobile phone networks.

Lovren also liked a post from Croatian MP Ivan Pernar, this was an image which appeared to be a meme mocking Bill Gates, tailored for those who are against vaccinations.

Here is some of Lovren’s social media activity that is bound to spark controversy:

Dejan Lovren believes Coronavirus is a hoax and that Bill Gates is trying to kill us with vaccines ????? Respect lost pic.twitter.com/0z3qyQh0MA

If this wasn’t controversial enough, Lovren recently hinted in an interview that footballers deserve a holiday to mentally deal with the pandemic.

It’s quite alarming to see an athlete for one of the biggest sports teams in the entire world backing such unfounded claims, we hope that this doesn’t encourage any of his followers to take any drastic measures.