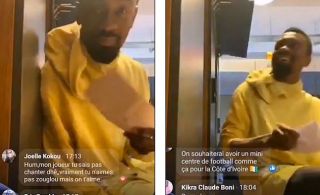 In an extremely ill-advised move, Hertha Berlin striker, Salamon Kalou, seemingly decided that a Facebook Live video where he fist-bumped team-mates and shook hands with others would be a worthwhile venture.

According to the Daily Mail, the now deleted video was greeted by widespread shock in Germany, where it’s hoped that a Bundesliga return isn’t too far away.

However, given that there were 10 positive tests between the 36 clubs in the Bundesliga and German second division, per the Daily Mail, his actions are ridiculously stupid.

Bursting in on team-mate, Jordan Torunarigha’s test also drew a sharp response from the doctor in charge. “Sala, please. Sala, delete that, please,” he says, with the former Chelsea man suggesting that he was “only joking” per the Daily Mail.

Given that the video clearly shows that Hertha are breaching the strict protocols that are being put in place, one has to question whether such stupidity will have the effect of stopping the Bundesliga return entirely.

Clearly, if the world of football is to return to anything like the normality it had pre-virus, then everyone; players, staff and directors, have to toe the line and do whatever is necessary to ensure that there are no further outbreaks.

The Bundesliga branded the video “absolutely unacceptable,” according to BBC Sport. It also led to Hertha suspending Kalou later on Monday evening, per BBC Sport.

“Salomon Kalou was tempted by his negative test results to greet the other players in the dressing room, sometimes with a handshake, contrary to the clear announcements made by health authorities,” their statement read. “With his ‘Corona Song’, Kalou gave the impression that he is not aware of the extent of the ongoing pandemic.

“With this video taken inside the team’s dressing room, Kalou broke clear internal rules and displayed a behaviour, which is neither appropriate for this current situation, nor reflective of the code of conduct of Hertha BSC.

“The club has therefore made the decision to suspend the player in question from training and matches with immediate effect.”