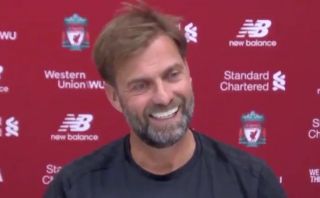 It’s clear that suggestions are getting increasingly more desperate as those in charge look to find a way to bring football back, but you have to wonder about some of them.

The Sun recently reported that PFA chief Gordon Taylor had suggested that games could be played over a shorter length – seemingly this suggestion is more to reduce general injuries rather than anything Coronavirus related.

It seems to be a non starter as there’s no way fans will accept a final league table that features results based on different game situations, but it’s interesting to look at what difference it could make.

They mocked up a league table based on games only lasting 80 minutes this season, and there wouldn’t be a great deal of difference:

Courtesy of The Sun

Liverpool are still miles clear at the top of the table, although the suggestions of an unbeaten season wouldn’t have lasted as long, while Norwich are still rooted to the bottom.

Man United would be closer to Chelsea in fourth position but would still just miss out, while Newcastle would be plunged into the relegation zone – something that would probably affect their potential takeover too.

The suggestion just doesn’t seem possible so it’s unlikely to happen, but you can imagine it would result in all kinds or arguments at the end of the season if it did.