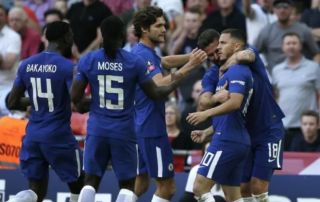 There’s been plenty of speculation about how different clubs will be affected by the Coronavirus in the transfer market, but Chelsea could find themselves in an interesting situation.

They are famous for stockpiling players, they loan them out and sell them on, but if the market collapses then they could be left with a very bloated squad.

Nobody will want to be stuck somewhere they won’t get to play, but finding suitable destinations could be an issue, but it sounds like Tiemoue Bakayoko has his eyes on a return to similar surroundings.

He’s due to return from Monaco this Summer, but it’s hard to see him getting a chance in the Chelsea team. As a result, Sportsmole have reported that he’s hoping AC Milan will come in for him.

He played there on loan in the 2017/2018 campaign and he did impress in spells, but not enough to seal a permanent move or to show Chelsea that they should give him a chance.

They indicate that Chelsea would be looking to recoup the £40m fee they paid for him, but they would need to accept less than that for Milan to land him.

It’s not actually clear if the Italian side would be interested, but it seems likely that he will won’t be at Chelsea next season.