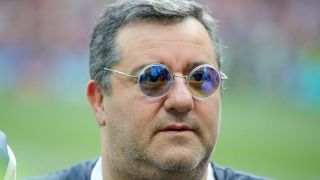 Mino Raiola has slammed reports suggesting that Henrikh Mkhitaryan sent a message to Arsenal over wanting to seal a permanent exit to join Roma this summer.

The 31-year-old joined the Giallorossi on a season-long loan deal last summer, and although his campaign has been disrupted by injury, he has managed to impress when featuring after bagging six goals and four assists in 20 appearances.

Time will tell what decision is reached on his future as he prepares to return to Arsenal this summer when his loan deal expires, but as noted by the Metro, via Corriere dello Sport, it has been reported that the Armenian playmaker has informed the Gunners that his ‘time in London is over’ and that he wants to stay at Roma on a permanent basis.

It’s added in that report that Arsenal have lowered their demands to around €10m for Mkhitaryan, and so that seemingly paved the way for a permanent switch to the Italian capital ahead of next season.

However, that is all now in doubt as Raiola took to Twitter, as seen below, to insist that his client has not sent any message to Arsenal and has branded the ‘fake news’ as ‘completely unacceptable’.

In turn, it remains to be seen what the future holds for Mkhitaryan, as given he departed before Mikel Arteta was appointed boss, time will tell if the Spaniard wishes to have him back at his disposal next season.

If not and he intends on moving in a different direction, then a move to Roma surely can’t be entirely ruled out despite Raiola’s comments, as boss Paulo Fonseca has suggested recently himself that he is aware that Mkhitaryan wants to stay, as per the Evening Standard.

Mkhitaryan did not send any message to Arsenal. Specially in times like these, fake news are completely unacceptable. pic.twitter.com/Fyh35MdO9D