Gooners can get their latest transfer gossip here as we’ve rounded up today’s big Arsenal FC news all in one place.

The north London giants certainly need to do some strengthening after this difficult season, and fans will be pleased to see some of the big names being linked below.

First up, however, there is a rather strange update regarding the future of Henrikh Mkhitaryan, who is currently out on loan at Roma.

The Armenian supposedly told an Italian paper that he wanted out of the Emirates Stadium permanently, only for his agent Mino Raiola to come out on Twitter to rubbish these quotes as ‘fake news’.

Zlatan Ibrahimovic then got involved with this strange tweet below… 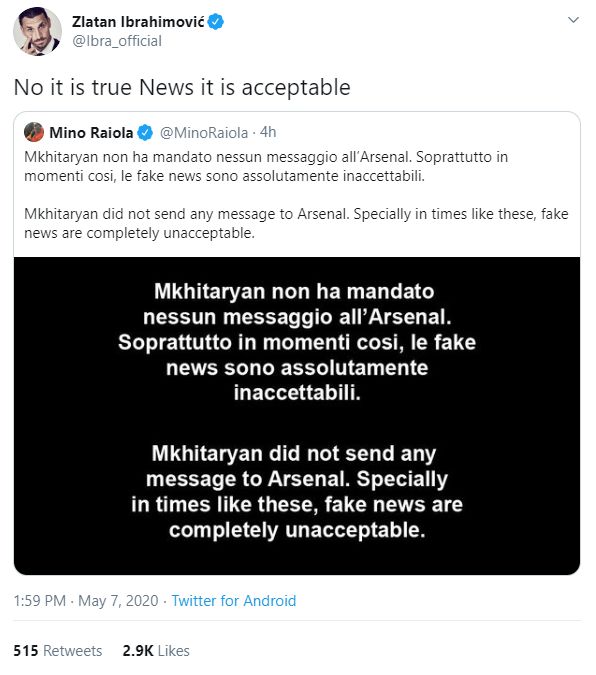 Who knows what the eccentric Swede means by this, but AFC fans will probably hope it means Mkhitaryan is in fact heading for the exit door after his lack of impact at the club.

On a more positive note, there have been claims that Arsenal could be offered the signing of Mauro Icardi as a replacement for Pierre-Emerick Aubameyang.

Inter want Aubameyang this summer but Icardi could be available as PSG don’t seem set to sign him permanently after taking him on loan this season.

The Argentine could be a fine purchase for Arsenal and it would be great to see him in the Premier League after witnessing what he can do in Italy and France.

Finally, there’s also good news coming from Spain as Dani Ceballos is set to be sold by Real Madrid.

The classy midfielder has had a decent season on loan at Arsenal, but his future has remained in doubt for some time.

Still, if he’s definitely on his way out of the Bernabeu that should put Mikel Arteta and co. on alert to get a deal done.