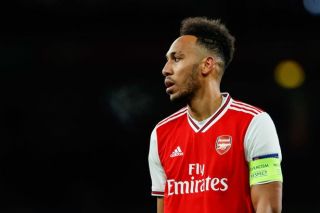 Amid ongoing speculation over Pierre-Emerick Aubameyang’s future at Arsenal, it has been reported in Italy that they could be offered a prolific replacement if he does leave.

As noted by the Metro, rumours are still rife over the 30-year-old’s future, as with just over 12 months remaining on his current contract, the Gunners have to make a crucial decision sooner rather than later.

Given his impact since joining them, scoring 61 goals and providing 13 assists in 97 appearances, they will surely be desperate to hold on to him and convince him to sign a new deal to commit his long-term future.

If that’s not possible, then a sale this summer would arguably be the next most sensible option to avoid the risk of losing him for nothing next year.

The report from the Metro above suggests that Barcelona are interested in the Gabon international, with a £30m fee touted.

However, as noted by Calciomercato, via the paper edition of Tuttosport, it’s suggested that Inter are also keen on Aubameyang as one of their options to replace Lautaro Martinez if the Argentine leaves the San Siro this summer.

Further, it’s reported that the Nerazzurri could be prepared to offer Mauro Icardi to Arsenal in a player exchange deal, assuming that Paris Saint-Germain don’t exercise their option to sign the loanee on a permanent basis this summer. The Daily Mail reported last month that that might be the case.

Although he’s had his problems off the pitch which led to his exit from Inter last summer, the 27-year-old can’t be faulted for his play on the pitch and has been a prolific figure in recent years.

After scoring 124 goals in 219 games for Inter, he contributed 20 goals in 31 outings for PSG this season, and with the Ligue 1 season being prematurely ended, it helped them to another league title.

Time will tell what the French giants decide to do, but as far as Arsenal are concerned, if they are forced to consider an exit for Aubameyang this summer, they could do a lot worse in terms of finding someone to replace his goals.

The pair are undoubtedly very different players though and so it remains to be seen if Icardi would fit into Mikel Arteta’s plans, and whether or not it’s an offer which can test Arsenal’s resolve.